On August 11, according to foreign media reports, a study published by Washington University in St. Louis in the "Nature-Communications" showed that a wall brick can be used as a method of storing electrical energy to power LED lights.

As we all know, an ordinary wall brick seems to have nothing to do with high-tech, but used to build a house, but the researchers of Washington University in St. Louis broke this concept and brought new uses for the wall brick. They tried to use the brick The block serves as a device for storing electricity.

The research team started with ordinary red bricks, and then combined PEDOT's conductive polymer. This material is composed of nanofibers, which work in the porous structure of the brick, which can eventually turn the entire material into an "ion sponge" that conducts and stores energy.

PEDOT is a polymer of EDOT (3,4-ethylenedioxythiophene monomer). The molecular structure is shown on the right. PEDOT has the characteristics of simple molecular structure, small energy gap, and high electrical conductivity. It is widely used in the research of organic thin-film solar cell materials, OLED materials, electrochromic materials, transparent electrode materials and other fields.

The researchers found that this enables the brick to become a supercapacitor, which not only has the characteristics of fast charging and discharging of the capacitor, but also has the energy storage characteristics of a battery. And they can be stacked together to become a larger energy storage device. In addition, epoxy resin coating should be painted on the wall tiles to protect them.

In the test, a brick can be charged to 3 volts in 10 seconds, and then light up the green LED light for 10 minutes. The researchers pointed out that these bricks can also work in water and can be connected to renewable energy sources such as solar cells. As supercapacitors, these bricks can be charged hundreds of thousands of times per hour.

Researchers said that this method is simple and low-cost, you can use new bricks or recycled old bricks. And only 50 bricks can realize emergency lighting power supply for 5 hours. 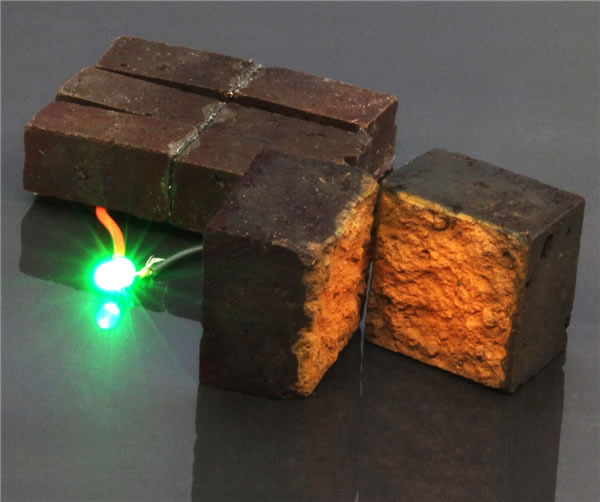 Next: The Johns Hopkins University researched and developed non-flammable lithium-ion battery can be immersed in water /